More police on the streets 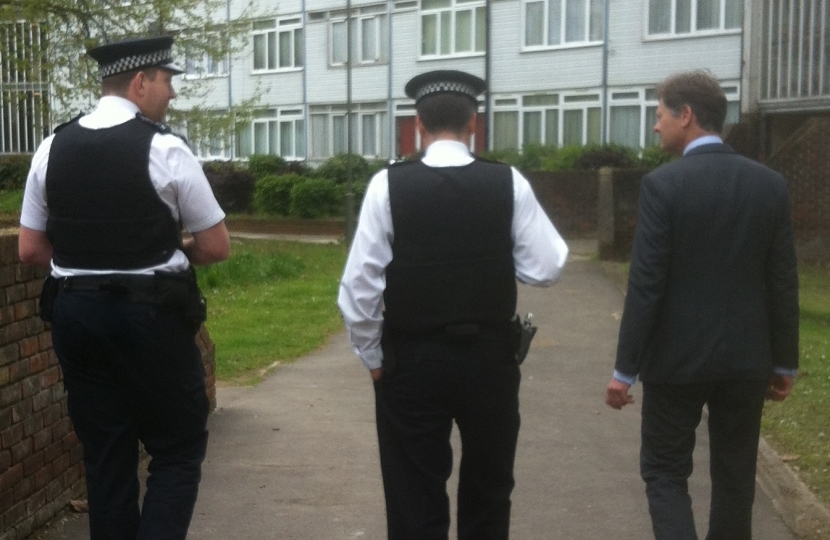 A priority is to tackle crime, anti-social behaviour and the causes of crime which produce so much anxiety among local people.

Under Labour the police spent 50% more time on paperwork than they did out on patrol. Labour’s obsession with targets and box-ticking hindered the fight against crimes like burglary.

Getting more police on the beat is a top priority for me.

One of the greatest issues of concern amongst my constituents is crime and the fear of crime.  There is much scare-mongering from my opposition on this so I thought it would be useful to explain what is actually happening to police reform.

We have the best police officers in the world.  They do their work unarmed, they live in the communities they police, they operate with the consent of the public.  But for the sake of police officers and the public, there are many things about policing that need to change.  That is why police reform will:

·         Reconnect the public and the police to ensure that they act according to local needs;

·         Place a new emphasis on tackling serious and organised crime; and

2012 is the year in which police reform comes together. Across the country Police and crime commissioners will be elected in November.  The first Winsor Report into pay and conditions was largely accepted by the Police Arbitration Tribunal in January.  The second Winsor Report was published in March.  We are legislating to create a National Crime Agency.  We are establishing a College of Policing.  And Her Majesty’s Inspectorate of Constabulary has confirmed that the police are making the savings they need, while protecting the frontline, increasing neighbourhood policing and cutting crime.

Changes to Safer Neighbourhood Teams (SNTs) in the Hendon constituency

The role of SNT sergeants has been reviewed as part of reducing bureaucracy in the police, for which the public and the media have long been calling.  SNT sergeants are not on the front-line – they are "managers".  Council leaders, including Labour, told the Metropolitan Police Authority that the model of one sergeant to five staff was too 'supervision rich' in most circumstances.  The changes will not alter the number of teams but they will give greater flexibility to Borough Commanders to target their resources and the opportunity for sergeants to be used more effectively. The police should be chasing criminals - not targets as they were under the last Government.  Inevitably police numbers fluctuate, but London Mayor Boris Johnson has said there will be 2000 more officers taken from back office posts and put in Safer Neighbourhood Teams over the next year.  This will mean far more front line local policing, exactly what we all want.

Police officers join the force because they want to catch criminals and keep their communities safe.  But for too long they have been hamstrung by red tape and form filling. That is why the Government is cutting police bureaucracy, which if fully implemented in every force could save up to 4.5 million police hours per year.  That is the equivalent of putting over 2,100 police officers back on the streets.

Officers in all forces should now have started to see the impact of reforms in their day-to-day work.  Most officers now have a simpler, quicker and more focused performance and development review.  They should be following more common-sense health and safety guidance.  The stop and account form should be a thing of the past. In the criminal justice system, there are new video links systems so police officers don’t have to waste time waiting at court.  And there are now electronic systems in place for the police to manage cases with the Crown Prosecution Service, rather than photocopying, typing and taking papers to court.

We have also restored police discretion over some charging decisions, saving up to 50,000 hours per year.

A pay system that rewards skills and anti-social hours

The police spend around £11 billion per year on pay – around eighty per cent of total police spending.  Reforming police pay and conditions is about more than saving money: we need reform so we can reinvest some of those savings in the frontline, and reward skills, performance and crime-fighting.  That is why the Government commissioned Tom Winsor to carry out a full independent review of police pay and conditions.

The existing police pay system was designed over thirty years ago.  Since then, the way the police work has changed a great deal, but the way they are paid has not. In the late 1970s, for example, the vast majority of officers regularly worked unsocial hours.  Now only around sixty per cent do.  Since the 1970s, pay systems in the private and the wider public sector have changed to recognise and reward skills. The most productive employees are paid more, and incentives are used to improve performance.  But in the police that doesn’t happen enough.  Skills, performance and successful crime fighting aren’t rewarded. Time served still determines how well most police officers are paid.  I believe that’s wrong.

The Home Secretary asked Tom Winsor to design a system that is fair to the taxpayer and fair to police officers and staff.  Winsor provided an outline of what a modern police pay structure could look like.  His recommendations can produce savings and improve incentives, and reward skills and frontline service, not just time served.

Reconnecting the public and the police

In January we launched a single non-emergency number to contact the police – 101 – to replace the various 0845 numbers used by forces around the country.  This is an easy-to-remember number for the public to use when they need to contact the police when it’s not an emergency, for example to report a crime that has already happened, to get advice or to raise local policing issues.

As well as making it easier to contact the police, we are also giving the public more information than ever before about crime and policing in their area through street-level crime maps.  Our crime mapping website – police.uk – is one of the most popular government websites, and it is now starting to show the public what action the police took and what the criminal justice outcome was.  For example, the public can see if a criminal was arrested, charged and sent to prison.

Cutting down on waste and inefficient spending

Like the rest of the public sector, the police are having to play their part in dealing with the deficit.  People often say there will be twenty per cent police cuts, but in overall terms it will be less than that because the police get about a quarter of their money from the local precept.  In addition, freezing police pay means the cuts are effectively lower, because eighty per cent of police spending is on pay.

This is not to say that police budgets in this spending period aren’t challenging, but they are achievable. For example, we know from HMIC’s work in 2010 that if the least efficient forces brought themselves up to the average level of efficiency, we could save £1.15 billion per year.  And we know that if all forces caught up with the most efficient forces, we could save a further £350 million.

We also know that money can be saved through better procurement. The police are a fragmented customer, buying the same things in 43 different ways from different suppliers, spending more than they ought and getting less than they deserve. That is why we have already introduced regulations to join up procurement, with better contracts, more joint purchasing and greater private sector involvement.

By putting in place framework contracts for standard things like body armour we can cut out this needless waste.  The police procurement programme has already realised savings of £96 million – a total projected to rise to approximately £200 million per year by the end of the spending review period.