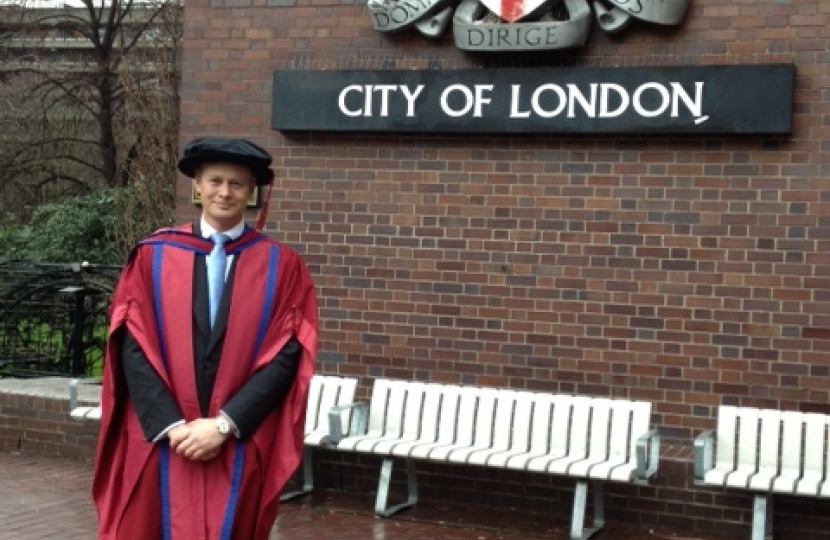 Matthew has been awarded a Doctor of Philosophy by the University of London after submitting his thesis to King’s College, London. Matthew’s thesis, entitled ‘Rural Governance and Economic Development: The Changing Landscape of Rural Local Government’ is an academic examination that considers whether changes introduced through the Local Government Act 2000 has introduced a measure of uniformity in the way rural councils work.

Looking at the way councils promote economic development and their local economy, Matthew interviewed a range of voluntary, private and public sector organisations and individuals to ascertain how they reacted to government legislation. His research was undertaken in the county of Cornwall as it is an exemplar of a traditional, peripheral rural county with an economy based on traditional industries that have experienced decline that made the county "Britain's first decayed industrial area”. Matthew also grew up in the county and recognised the effects of social exclusion and the lack of political direction in addressing the issue amongst the population.

Matthew said: ‘I started my PhD research sometime ago and sought to discover how local councils have changed in the way the Government of the day presumed they would. It has been an enjoyable exercise to undertake in order to contribute to academic research and was also interesting for me as a local councillor at the time.

As an MP the experience of using thorough research methods is now useful in Select Committee cross-examinations as well as considering political debate. One of the most frustrating aspects of becoming an MP is hearing people make statements which they present as fact when it is simply their opinion. Academic research does not allow such a practice and transferring that skill is useful in drilling down the reality of statements made.

This award marks a very proud day for me as I received my award from one of the oldest universities in the country and certainly the oldest in London. Unlike some MPs, I did not attend a private school but had to work my way through an education system that I did not consider fit for purpose. Not all my school friends have been as fortunate as me in this regard and I consider this award to be for them as much as for me.”

Matthew joins a list of other MPs who have been awarded a degree at this level, including Dr Gordon Brown, Dr Alan Whitehead, Dr Therese Coffey, Dr Julian Huppert and Dr Eilidh Whiteford.