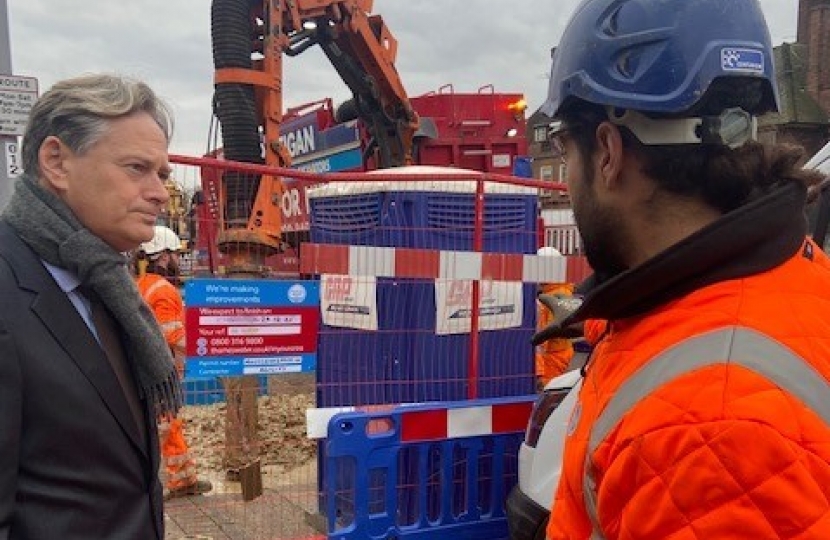 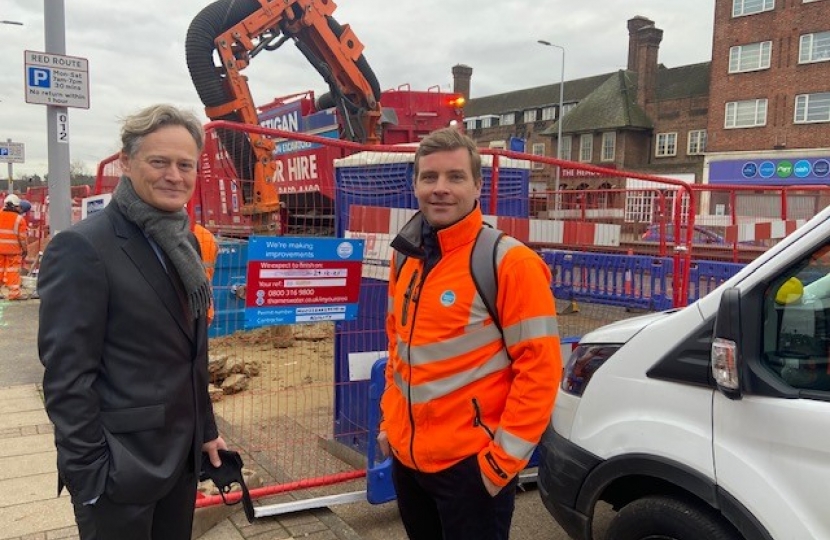 Matthew has visited the site of a second major water leak in four days that is continuing to cause disruption on the A41 in Hendon. The main 24-inch diameter pipe burst closed two lanes of traffic on Tuesday. Emergency works were immediately undertaken to isolate the pipe to stop water flowing out with a re-routing of water to the ring main to continue supply. Local constituents have told Matthew that water has returned in many cases but that the pressure is lower, as expected in such a scenario.

The ring main is an alternative system below the level of most water mains and serves as a partial alternative transfer system to existing trunk mains which are increasingly experiencing leaks and bursts due to their age. Matthew has been informed that the original pipe will need to be fully excavated, isolated, removed, replaced and then reconnected. Further complications may arise if the storm and sewer pipes, which lie very near to the clean water supply, are also damaged. This will require a complete flushing out of the whole system. Other utility providers also have their infrastructure in the same location requiring a joint-agency approach.

The ring main will ensure continued supplies of water but it will be a major works to remove and replace the damaged pipe. Much of the water network in London dates from the Victorian age and while there is a replacement programme continuing, some fail. At this time of year the ground contracts with changing temperatures resulting in fractures of pipes and subsequent leaks.

Matthew said: “I have met with employees from Thames Water on site to understand what the problem is at the water leak and the action needed to repair it. It’s not a case of simply plugging a hole in a pipe but a major excavation on one of the strategic routes into London. A whole section of pipe will need to be replaced and this could take up to two weeks. But I have been assured that Thames Water will be physically working around the clock at the location on the A41. As a local resident, it is frustrating to have this problem but I am satisfied that all works are occurring in a timely manner.”