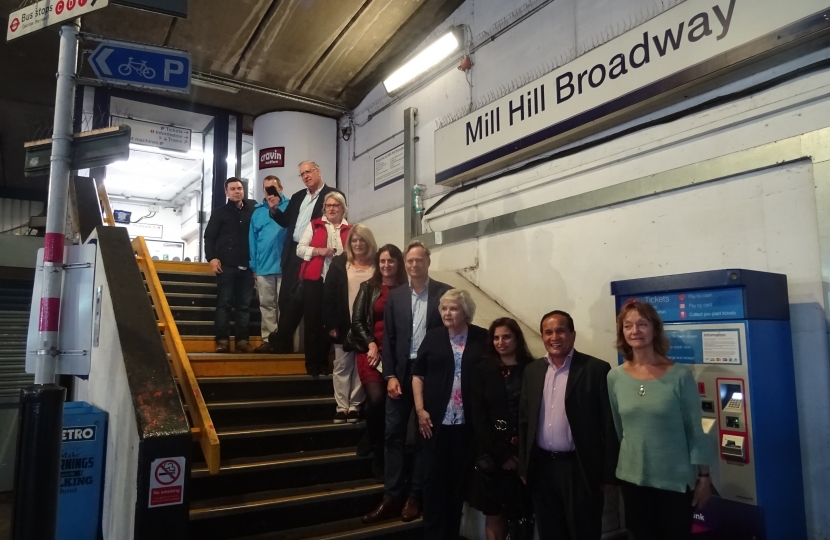 Leading a debate in Westminster Hall this week on Accessibility at Railway Stations, Matthew highlighted the importance of public transport for millions of people and the issues faced by disabled passengers and passengers with mobility restraints when using railways stations.

Matthew raised the vital need for step-free access at Mill Hill Broadway station which has a footfall of 2.7 million passengers per annum and is situated on the busy Thameslink line which serves Gatwick and Luton airports, as well as St Pancras International, London Bridge and Blackfriars.

Accessibility at Mill Hill Broadway is notoriously poor, with 39 steps that must be climbed to reach the station. In 2015, Matthew facilitated a series of meetings with representatives from Barnet Council, Network Rail, Mill Hill Neighbourhood Forum, Govia Thameslink Railway and Transport for London which resulted in a £60,000 feasibility study to look at the options for step-free access. This was subsequently used to support a bid to the Government’s ‘Access for All’ programme which is currently considering applications for an additional £300m of funding which is being made available.

During the debate, Matthew referred to how the lack of step-free access resulted in the untimely and tragic death of one of his constituents, who tripped on the steps at the end of last year on her return from having treatment for leukaemia in central London. The family of the deceased were in the Public Gallery to listen to the debate and had the opportunity to briefly speak to the Rail Minister, Nusrat Ghani, afterwards.

Speaking after the debate, Matthew said: “There is no question that the lack of a lift prevents some people from using this station – the disabled, elderly, parents with buggies and passengers with luggage. The advice to go to another station several miles away is not acceptable.

“The lack of step-free access resulted in the untimely and tragic death of a well-loved Edgware resident. I am grateful to her family for allowing her tragedy to highlight the long overdue and urgent need for a lift at Mill Hill Broadway."

Responding to the debate, the Rail Minister announced that, although she could not guarantee the inclusion of any single station, Mill Hill Broadway in particular was a strong candidate when considered alongside other stations across the country. An announcement is expected in April.

The full debate can be read here