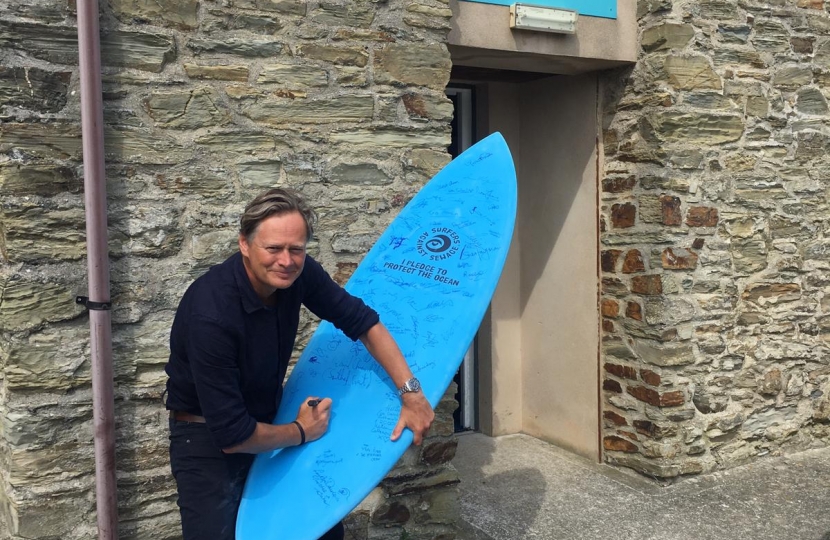 Matthew has taken advantage during Parliament's summer recess to meet with environmental pressure group Surfers Against Sewage to discuss the amount of untreated sewage that is discharged into our coastal waters.

The UK is subject to the demands of the EU’s Bathing Water Objective, often credited with improving the water quality on the UK’s beaches. However, Matthew has always been critical of the legislation as it allows sewage discharges outside of the monitoring period. Untreated sewage is also discharged after a large amount of rain has fallen as sewers fill up with rainwater.

In response to a Parliamentary Written Question at the end of July, Matthew was told that spill data was reported for 6,182 storm overflows in England with a total of 146,930 spill events during 2018. While it is known that 17.5 billion litres of treated sewage are discharged from treatment works each and every day, it is not know how much quantity of untreated sewage enters our bathing waters.

Matthew said: “Ever since I was employed as a beach lifeguard water quality has been very important to me, as it is to many people at this time of year. But it is a myth that our beaches are cleaner as a result of the Bathing Waters Directive. Out of thirty countries in the EU, the UK only comes 25th for results of ‘Excellent’ water quality and still allows discharges of raw sewage to enter the sea.

"This is an issue over which I will continue to pursue the government to find out how much sewage is being discharged and when the issue will be addressed. Billions of pounds has gone into improving water quality but more needs to be done. This could be at risk from a future Labour Government if they renationalise the water industry and thereby remove the investment being made by water companies.”

Matthew is pictured signing the Surfers Against Sewage commitment board, pledging to protect the sea around the UK