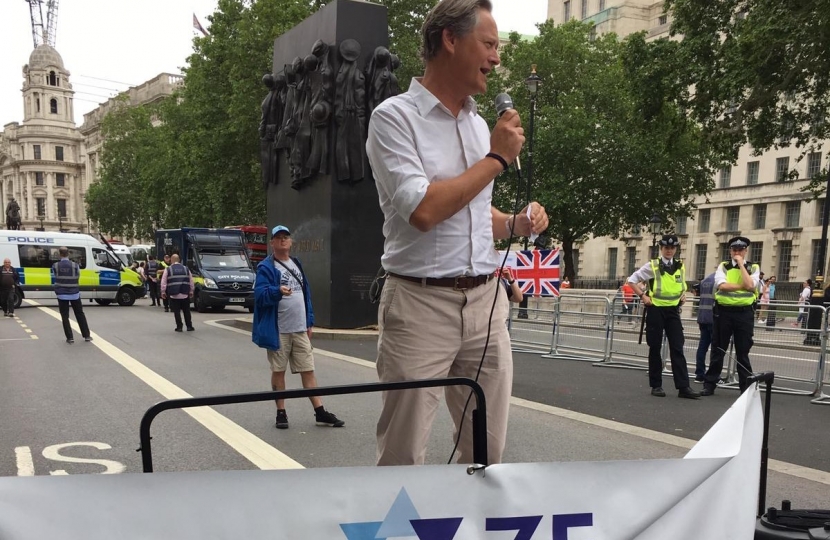 Matthew took part in the opposition demonstration to the Al Quds Day rally in central London at the weekend. The controversial Al Quds Day rally, held each year, was created by the Iranian government in 1979 to ‘express support for the Palestinian people’ and to oppose the state of Israel. Previously demonstrators have flown flags of Hezbollah but following a campaign by Matthew and other MPs, the organisation was proscribed in its entirety this year which prevented the display of such items.

Speaking to the crowd, Matthew said it was a pleasure to attend the event now that Hezbollah had been banned but he lamented the absence of Mark Lewis, the campaigning lawyer who had stopped the progress of the march last year by positioning his wheelchair in front of the demonstration.

Matthew said: “The Al Quds Day protest is a barrier to a two state solution and peace in the Middle East. It provides legitimacy to terrorist organisations by promoting a cloak of respectability to oppose Zionism and attack the legitimacy of the state of Israel.

"Since last year the British Government has woken up to this reality and has proscribed Hezbollah in its entirety. This action has been followed by Arab countries that have begun to speak out against the Iranian regime, telling them to stop interfering in the internal politics of individual states in the Middle East.

"I believe change will come and I will continue to seek a solution that will allow the Palestinian and Israeli peoples to live side by side in peace and security.”

Matthew was joined on stage by Councillor Roberto Weeden-Sanz, the Conservative London Assembly Candidate for Barnet and Camden, who told the crowd that if he is elected he will campaign for the London Mayor to stop the annual protest.