Matthew tackles TfL over congestion in Hendon and Mill Hill 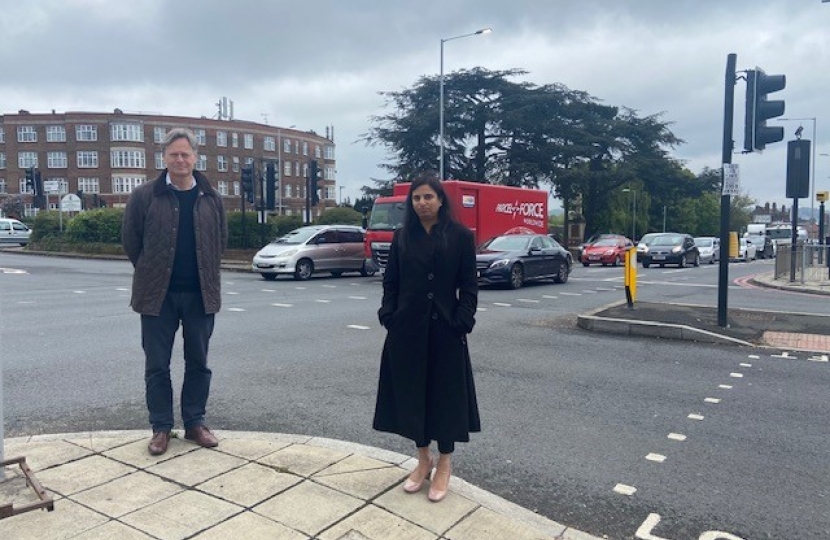 Previously, there was no traffic signal at the Station Road junction and left turning traffic simply gave way to vehicles on their right travelling up the A41.

In The Burroughs, traffic has always regularly queued back as far as Brampton Grove - approximately 200 metres – but the recent introduction by Barnet Council of kerb build-outs, a pedestrian crossing and junction narrowing on roads off The Burroughs has exacerbated the amount of queuing traffic and vehicles now stand as far back as Church End - possibly 600-800 metres. Such a length of queuing traffic does not allow vehicles to pass through on a single phase of the lights and, in addition, can hinder vehicles seeking to turn right into Church End and onto Greyhound Hill.

Matthew said: "The left lane lights at both junctions result in vehicles wishing to filter left onto the A41 being held in a queue that increases the amount of traffic on Station Road and The Burroughs respectively. Coupled with the traffic measures introduced by Barnet Council, these filter lights are causing levels of congestion - and pollution - that are unbearable. I have written formally to TfL asking that they review these junctions and put forward proposals to address these issues."

Matthew has also raised the issue of congestion at Mill Hill Circus roundabout on the A1/A41. This roundabout can become completely blocked for vehicles travelling northwards or southwards along, or when turning left out of The Broadway, due to vehicles continuing round the roundabout as they attempt to drive southwards or as they seek to navigate their route eastwards onto Lawrence Street. During peak hours (7-10am and 4-7pm) traffic can be fully congested on the west and east section as well as on the east to south section.

Matthew said: "This has led to a situation where the roundabout is now described as not fit for purpose; indeed, rather than a measure to allow four entrances and exits for vehicles and to slow down traffic, this roundabout causes massive congestion in all directions. TfL is responsible for all these locations and they need to take action to deal with the problems being caused."

Matthew is pictured with West Hendon Councillor Saira Don at the junction of Station Road and the A41 where residents believe there is no need for a left turn filter light .