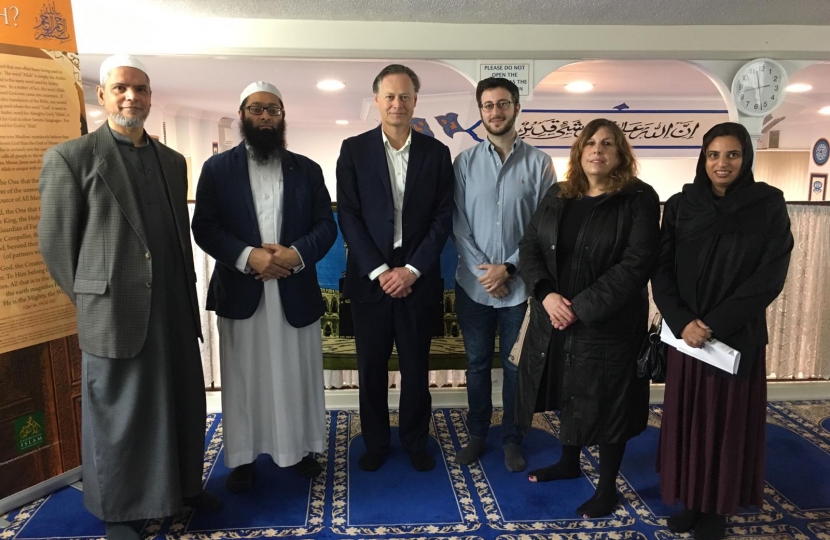 Matthew accompanied local councillors on a visit to West Hendon Mosque as a part of ‘Visit My Mosque’ day.

This is the fifth year the initiative has been running and though it was not Matthew’s first visit it allowed him to hear about out-reach work being undertaken, such as the Sufra Food Bank and Kitchen. West Hendon Mosque has been open for over thirty years now and is very much part of the community on the West Hendon Broadway.

Matthew said “It is always a pleasure to visit West Hendon Mosque and hard to believe that I first turned on the Eid lights 13 years ago, when I was a local councillor. All through that time my constituents have been using the Mosque and engaging in activities to help other people.

“I am proud that I have been able to speak out for my Muslim constituents on issues including the North London Coroner not issuing death certificates without delay, the ability of parents to opt their children out of inappropriate relationships and sex education, and defending the practice of Halal slaughter.

“As the Member of Parliament for Hendon I have learnt about many religions and cultures and visiting Pakistan, Iraq, Afghanistan, Bahrain and Somalialand has allowed me to understand the traditions of many of my constituents. I really look forward to visiting the Mosque again soon.”