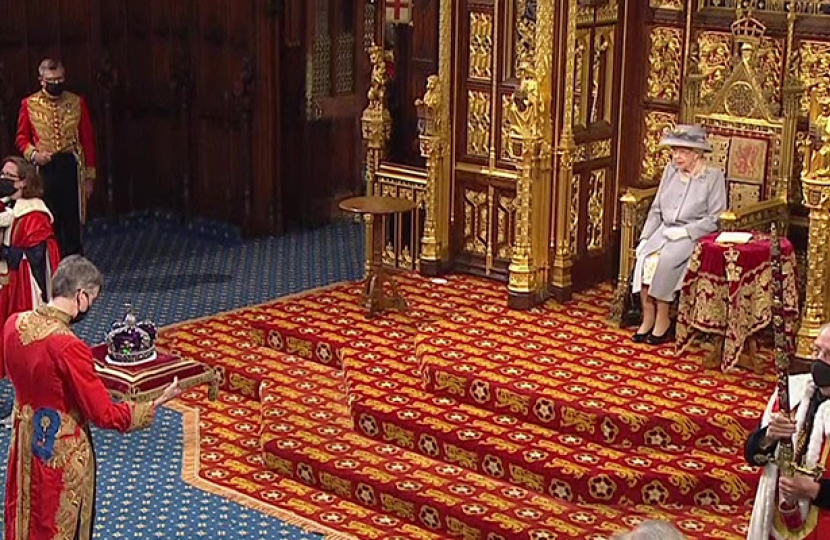 The focus of today’s speech was recovery from the coronavirus pandemic and levelling up the country.

Contained in it were 30 new bills which included measures to increase sentences for the most dangerous offenders, better protections for leaseholders, plans to protect freedom of speech, and a ban on conversion therapy.

Matthew said: “It has been a tough year for everyone in Hendon and across the country. Following the success of the vaccination programme and with coronavirus cases so low, we can now focus on our recovery and build back better than before.

“I’m delighted that many of the announcements made today will directly and positively impact people in the Hendon constituency. For example, the Building Safety Bill will introduce a new system for regulating the safety of high-rise buildings.

“On top of this, in our first Parliamentary session to begin outside of the EU, we can now see the full advantages that Brexit brings. As an environmentalist, I’m delighted to see more legal protections for animals and binding environmental targets.

You can see a summary of measures announced and Matthew's comments below.

The landmark Environment Bill will introduce new post-Brexit rules on protecting nature alongside new bills to ban the export of live animals and introduce mandatory microchipping for pets.

All of this will be met by investment in new green industries which will help create jobs.

A proposed Planning Bill will modernise the planning system so that more homes can be built.

However, standards will be improved as the Building Safety Bill will introduce a new system for regulating the safety of high-rise buildings.

Matthew says: "As an area of London which is seeing much development, I particularly welcome measures to ensure that tragedies of the past are never repeated.

"Also, as a former leaseholder myself, I welcome the measures to to end the practice of ground rents for new leasehold properties."

The Government will seek to connect people not just virtually but physically too, with investment in connectivity by rail and bus.

Matthew says: "I particularly welcome investment in broadband to increase the internet speeds across the whole of the constituency, particularly in Edgware and Mill Hill."

A Skills and Post-16 Education Bill will introduce a new "flexible loan" system.

Matthew says: "This Bill is a welcome opportunity to ensure that people can continue with lifetime learning to improve their skills and increase employability. It will also provide an alternative to those people who do not wish to go to university."

Legislation will be introduced to deal with legacy issues from the Troubles in Northern Ireland, including restrictions on future prosecutions of British soldiers

Government will also increase support for veterans with an Armed Forces Bill.

Legislation to increase sentences for the most serious and violent offences will sit alongside new bills to support victims.

The Government will also continue its focus on building a fairer immigration system to deter criminals who facilitate dangerous journeys for the most vulnerable.

Matthew says: "Measures to prevent people from risking their lives by crossing the English Channel in small inflatable boats will be welcomed. Many are victims of people traffickers and are in themselves victims. We must have a credible and fair asylum system that provides safety and security for those who needs it but equally prevents abuses of the system."

The Government will oversee the fastest ever increase in public funding for research and development and pass new legislation to establish an advanced research agency.

Proposals to reform the social care system in England.

A ban on LGBT conversion therapy in England & Wales.

A Higher Education (Freedom of Speech) Bill to protect free speech on campuses.

Matthew says: "I’m very keen to ensure that freedom of speech continues at our universities I also want to ensure that those voices who is may differ from the crowd, particularly those surrounding support the state of Israel, are not prevented from being heard."