Support and improve our local libraries 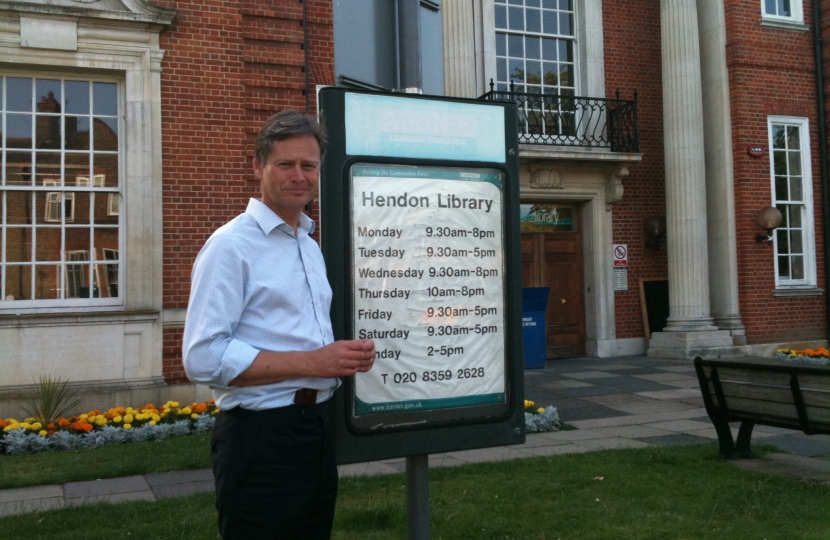 I welcome Barnet Council's consultation on libraries as part of my campaign for positive changes to enhance and improve the library service so that it becomes more attractive to local people who do not currently use libraries.

I have been a library member for many years and as the Member of Parliament held many of my advice surgeries in the libraries as a means of making them more accessible to residents. I have been a big supporter and promoter of the Summer Reading Challenge and visited every library in recent years to support parents in encouraging their children to read during the summer holidays.

Decisions over services such as libraries are for Barnet Council but I believe that the libraries in the Hendon constituency should be kept open and if I am elected as the next Conservative MP for Hendon, I will use influence not only to ensure that they are kept open - particularly in Mill Hill - but also enhanced with facilities such as community meeting rooms, cafes and full wifi access.

There has been scaremongering by some - including Barnet Unison - that Barnet Council's consultation on the libraries is part of a process to close them. Whilst this has been the case in other areas such as Labour-controlled Harrow, this is Barnet - not Harrow. I am proud of my own record when as a Councillor I refurbished Burnt Oak library to make it more attractive and relevant to people's lives and that as a result more people use it than ever before.

I want to see change in the libraries but that does not mean closure. In the March Budget the Chancellor announced that £7.4 million is being made available to help all public libraries install wifi. I want to ensure all our libraries have wifi and other 21st centurty facilities so they look and feel like the flagship library in Hendon.