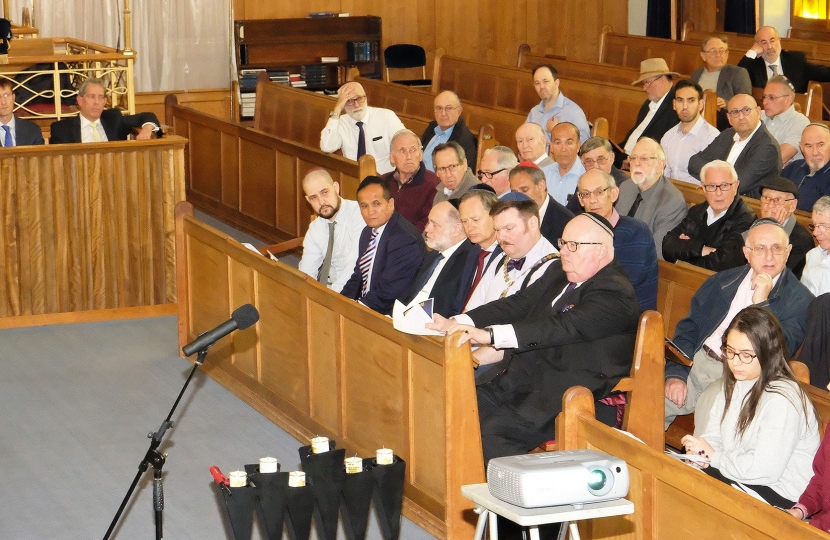 This week Matthew attended the Yom Hashoah Holocaust Remembrance Day at Edgware United Synagogue. The annual event commemorates the people who died in the Holocaust, many of them Jewish and approximately 1.5 million of them children.

As part of the remembrance service, six children lit candles in the synagogue to mark the six million people who it is thought were murdered by the Nazis. In a change from recent years, the service learnt of the experiences of Elia Meghnagi and other Jewish people who were persecuted by the Italian army in Libya during the Second World War. The event concluded with a speech by Lord Eric Pickles, the Government’s Special Envoy for Post-Holocaust issues.

Those who attended left with a Yellow Candle to remember an individual who perished in the Holocaust.

Matthew said “It was an incredibly moving service and it became all the more personal to receive a candle in memory of Yta Kosever of Rudomino who was killed at the age of 8 in 1941 at Wielucany in Lithuania.

"An initiative of this kind translates the numbers of those murdered into individuals and resonates that the murder of millions of people continues to have an affect on European society. Remembering these individuals not only keeps their identity alive, but is the only way we as the living can ever have a connection with them.”