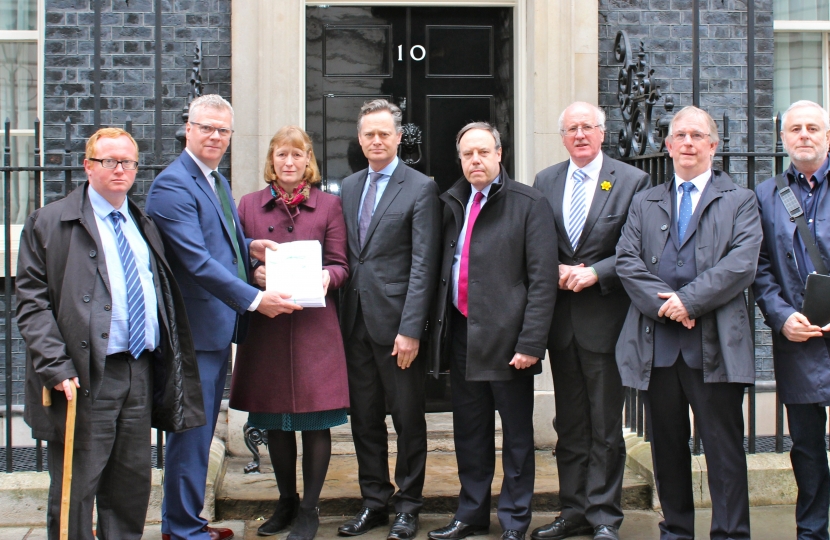 Matthew joined campaigners and other politicians this week to deliver a petition to 10 Downing Street calling on the Government to condemn Israel Apartheid Week (IAW) and enshrine the International Holocaust Remembrance Alliance (IHRA) working definition of anti-Semitism into UK law.

Eighty eight events under the IAW banner have taken place in taxpayer-funded universities across the United Kingdom over the last few weeks.

Campaigners and politicians believe that these events breach the provisions of the Public Sector Equality Duty (PSED) and the IHRA definition of antisemitism.

The IHRA provide examples of behaviour that qualifies as anti-Semitic, one of which is to claim that the existence of the State of Israel is a racist endeavour.

Matthew said: “Our Government was one of the first to adopt the IHRA definition of anti-Semitism. However, university vice-chancellors across the UK are simply ignoring its provisions. They are allowing IAW events to take place in campuses that are funded by taxpayers and that is not only unacceptable, it breaches both the PSED and the IHRA definition of anti-Semitism.

"People can hold events on university campuses on virtually any topic they like, they can also criticise any government they like but promoting events under the IAW banner is a deliberate attempt to portray Israel as a racist endeavour.

“This isn’t about preventing free speech, it’s about stopping hate speech, in this instance anti-Semitic hate-speech. Many of my constituents who are Jewish, and those who are not Jewish, are very unhappy with a culture of anti-Semitism which is being permitted within British politics and British institutions. I will continue to play my part to root out anti-Semitism - and speak out against it - and I will continue to press the Government to remove this racism from university campuses.”