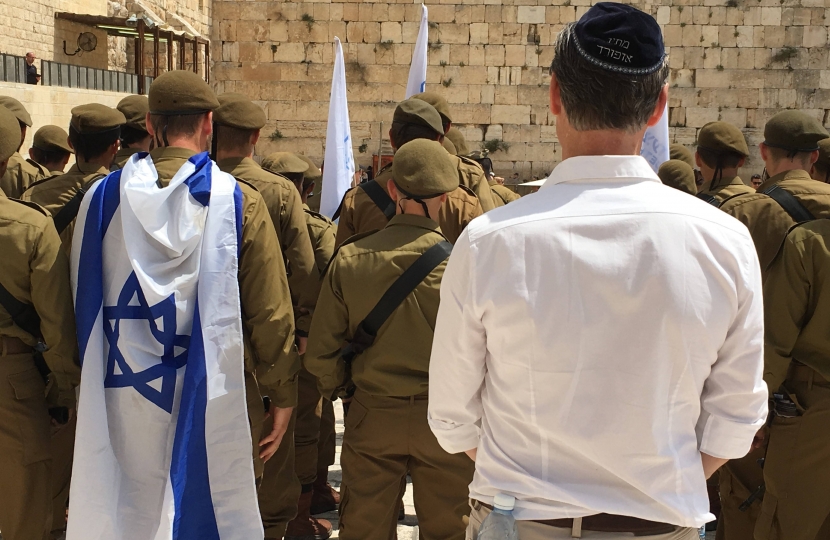 Yom Hashoah commemorates the six million Jewish men, women and children who were murdered by the Nazis in the Holocaust. Speakers at the ceremony included Israel’s Prime Minister Benjamin Netanyahu and President Reuven Rivlin.

Matthew also accompanied army recruits as they paid their respects to the Yom Hashoah at the Western Wall in the Old City of Jerusalem the following day.

As events unfold in Syria, Matthew also took the opportunity to visit the Lebanon and Syrian borders of Israel to see for himself how close the threat has reached. With Damascus less than 40 miles from the nearest crossing point, through the UN, to the Golan Heights, events in Syria have a dramatic impact upon the public's consciousness in Israel.

Matthew said: "Coming during the week when the State of Israel remembered the extermination of millions of Jewish people from all over Europe, the chemical attack in Syria has been greeted with horror by people in Israel. There is much sympathy with the victims and their families and anger at how a head of state could undertake such an action not only against other human beings but those who also live in the same country. Political attention in the U.K. has now turned on whether Britain should be part of an international force to take military action in Syria. While I have many unanswered questions, I believe that the Prime Minister should do so without seeking approval from Parliament in order to protect our nation's tactical and strategic position.

"The first time that Parliament was asked either to approve or to prevent a military deployment was in 2003, when Tony Blair secured not one but three Parliamentary votes on his invasion of Iraq and history reminds us how that ended. Parliament did vote against bombing Assad in 2013 - and last weekend’s chemical gas attacks may well be a direct result of that decision; and Parliament voted in favour of bombing ISIS in both Iraq and Syria more recently. There is no certainty that by holding a Parliamentary vote that the correct decision will be reached - all it does is ensure that the targets are able to be cleared on the weapons we are seeking to destroy.

"I want the Prime Minister to take a decision based upon the best military evidence sooner rather than later and update Parliament on that course of action. We should not forget that it was President Obama who said that the use of chemical weapons was a 'red line' that, if crossed, would not be tolerated. He was not good on his word and the chemical attacks have continued."