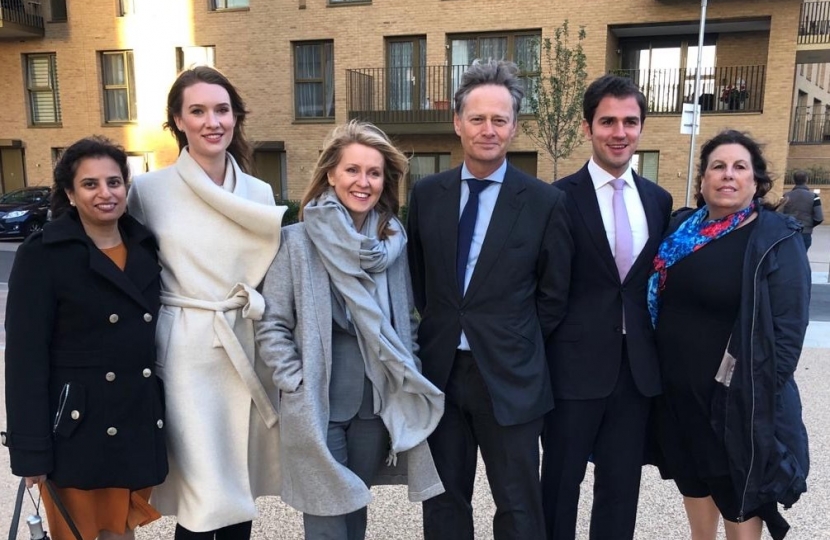 Matthew was delighted to join Esther McVey, Minister of State for Housing, on a visit to see the successful regeneration of the West Hendon estate.

The regeneration programme, spearheaded by Barnet Council, includes a mix of social, affordable and private housing – totalling over 2,000 new homes. Later phases of the programme will include improved infrastructure, a school, nursery and new commercial and community hubs.

During the visit Matthew and Esther visited local Conservative Councillor, Sarah Wardle, who recently purchased a new property on the estate with assistance from the Help to Buy scheme. Also accompanying Matthew on the visit were West Hendon Councillors Saira Don and Helene Richman and Barnet GLA candidate Roberto Weeden-Sanz.

Matthew said: “It was a pleasure to welcome the Housing Minister to West Hendon and show her a positive example of regeneration delivered by the Conservative council.

“By comparison, the Labour Mayor of London’s record on housing is one of failure. Sadiq Khan was given billions of pounds of funding by the Government to deliver on 116,000 affordable homes by April 2022. Now, over halfway through he has only delivered 30 per cent of this.

“Alongside our visit to see the new development, it was great to drop-in on Councillor Wardle and hear about the Help to Buy scheme. Everyone deserves a place to call their own and the Government's Help to Buy scheme has already helped over 500,000 households to buy a new home”

Esther McVey said: “I was thrilled to visit the West Hendon housing development with Matthew, their hardworking local MP. The development I toured delivers on the vision I have set out as Housing Minister: quality homes of every tenure side by side, social, affordable and private homes - offering families a place to call their own.”

“The development is an example of how a Conservative-led council in London is delivering the regeneration and homes their residents deserve, despite a Mayor who has presided over a 20 per cent fall in new homes in the capital, while nationwide there has been a 2 per cent rise.”